Last night a dream came true for my family. Although we watched the Tampa Bay Rays lose a heartbreaker to the Texas Rangers, before the game we met the legendary all-time strikeout king, Nolan Ryan.

He was sitting in a private buffet room behind home plate reserved for season ticket holders. I spotted him and ran outside to get my son and daughter. Although a bit shy, when Frank, my daughter and I approached his table, he immediately stopped eating, turned to us, signed our balls and posed for photos. 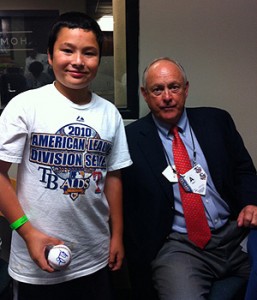 Unlike so many big league stars, Nolan Ryan is gracious, down to earth and appreciative of fans. Meeting him in person and getting his autograph, is a memory I will treasure forever.

You may not know this, but Nolan Ryan is legendary for other reasons, too. One of them has to do with his legendary flexibility.

Anyone who thinks flexibility has nothing to do with athletic performance, hasn’t studied this man. 27 years in the major leagues without a single serious injury. He threw the ball in the high 90-mph range, yet he never had Tommy John surgery or any of the other surgeries that so many pitchers have early on in their careers, not to mention when they get older.

If you ever watched Nolan Ryan pitch, you would see an incredible leg kick before each throw. You can’t kick your leg that high 100 plus times per game for 27 years unless you’re very flexible.

When tested in the following areas, Nolan Ryan ranked off the charts:

Flexibility alone isn’t the only reason for Nolan Ryan’s pitching prowess but there’s no disputing the fact that it must’ve played a significant role. And I, for one, happen to be in a similar boat.

At 47 years of age I have never had any major orthopaedic surgery – although I have had a number of injuries – all of which I’ve successfully treated and fixed with improved flexibility and mobility in my muscles, joints and tendons.

Find a group of lifelong athletes in any sport, and you’ll be hard pressed to speak to anyone who has been surgery-free. Today, even young kids are going in for major surgery. Yet, there are some people in the strength training world who don’t know the first thing about real flexibility. They think it’s all about how far you can stretch.

Wrong. It’s far more than that.

I cover this in illustrious detail in my Combat Stretching course.

Additionally I’ll be covering it in a hands-on way at my all new Combat Yoga – Combat Chi Kung seminar next month. Go here for details.

Matt Furey is the author of the international best-selling Combat Conditioning, Combat Abs, The Unbeatable Man and Expect to Win, Hate to Lose.

As well, Furey is president of The Psycho-Cybernetics Foundation.

Want to know something? I've made millions online even though some people (idiots, I'm told) think I'm full of bullshit.

Just to prove them wrong (or right) - I'm going to teach you my favorite Bullshit Ways to Make a Fortune on the Internet Starting right NOW. So do what all the other idiots (or geniuses) have done. I promise you won't regret how much I'm going to make you laugh while I DE-educate you.